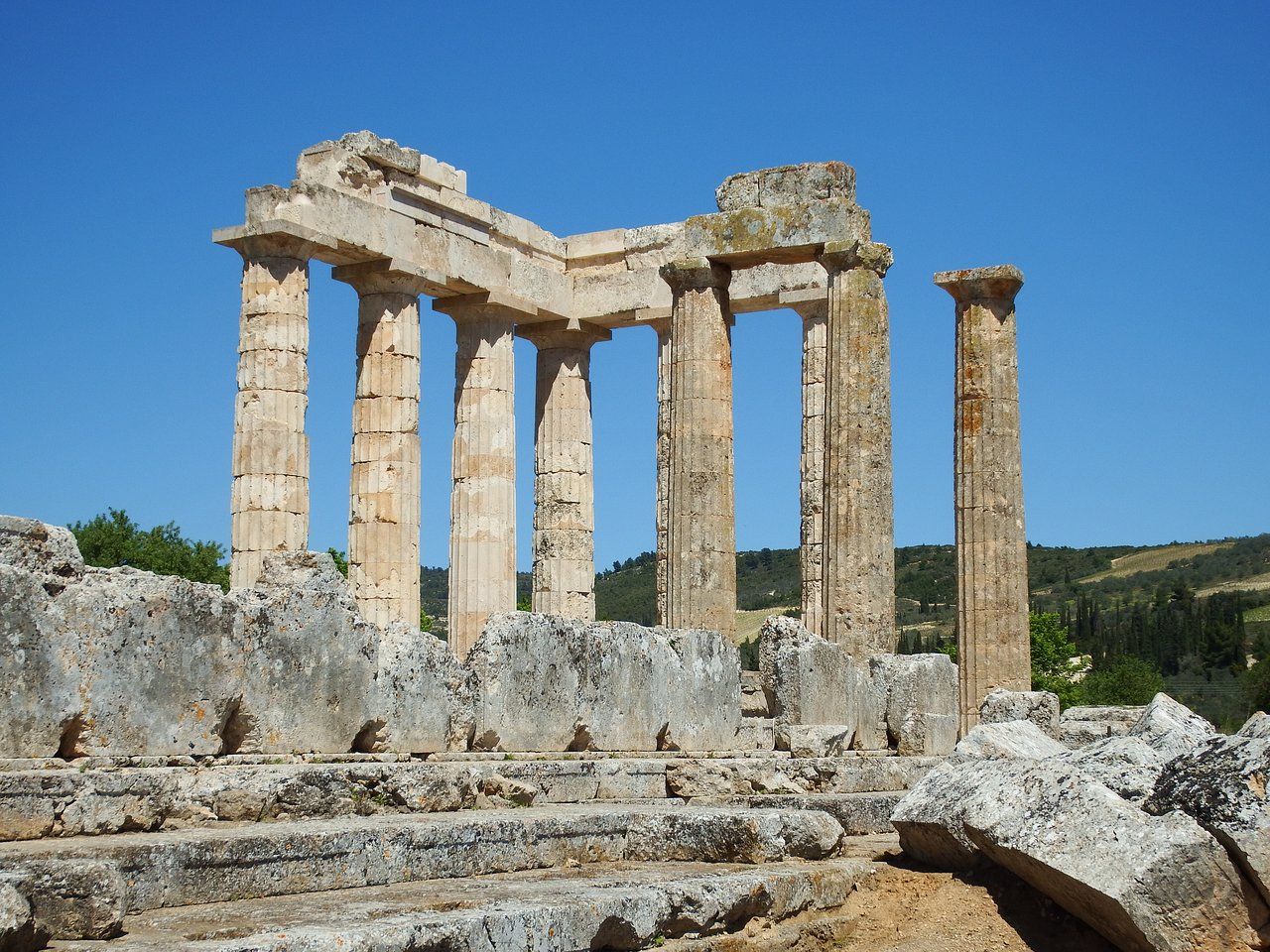 Only 20 minutes away from Loutraki, you can visit the town of Nemea, one of Greece’s best wine regions and home of the archaeological site of Ancient Nemea. The Nemea Valley is nestled within the Corinthian mountains and its ideal setting includes mountains, vineyards, olive groves, and, of course, the towering columns of the Temple of Zeus. The area has been constantly inhibited since Neolithic times due to the richness of the soil and the excellent weather conditions.

Ancient Nemea: Nemea excavations started years ago under the leadership of a committed academic at the University of Berkeley in California, USA, Prof. Stephen Miller. The Nemea Center for Classical Archaeology, University of California has the overall supervision of the excavations in full cooperation with Greek archaeologists. The most prominent feature of the site is the Temple of Nemeios Zeus. It is believed that the Temple was surrounded by several buildings, fountains, shrines and complemented by the Stadium of Nemea a short distance away. Visitors can enjoy the Temple, the Museum as well as the Stadium. According to Greek Mythology, Nemea was also home of the legendary Nemean Lion that ravaged the area until it was famously killed by Heracles (Hercules).

Nemea Games: Nemea was one of the regions in Greece playing host to the Panhellenic Nemea Games, similar to the Olympic Games, held in the honour of Zeus once every two years. The Modern Nemea Games are organised by the Society for the revival of the Nemea Games. The festival takes place in the ancient stadium (constructed about 330 B.C.) once every two years in early summer.  Participants run barefoot and wear white tunics.  They proceed through the ancient tunnel and they must run a 90m distance. The winner of each race receives a ribbon tied around the head and a branch of palm.  At the end of the day, each winner receives a crown of wild celery just as happened at Nemea more than 2300 years ago.

Nemea is one of the most significant winemaking regions in Greece hosting some of the most important wineries, including the famous Agiorgitiko. Nemea is surrounded by fertile plains that have contributed to the area’s wine production for millennia. Nemea boasts 3,500 years of winemaking history and several wineries and cultural sites are worth exploring. Wineries include the Cooperative Winery of Nemea, Domaine Bairaktaris, Lafazanis Winery, Domaine Spiropoulos, Lafkioti Winery, Palivou Estate, Gaia Nemea Winery, and Semeli Winery. Do not miss Nemea’s annual wine festival, Grand Days of Nemea, held annually at the beginning of September.

The festival includes grape-stomping with your feet, crushing wine grapes by stomping on them with your feet- so as to release their juice and begin the wine making process, wine tasting, cork making, story-telling, wine master class, blind tasting a lot of activities for kids.
Nemea wines: http://www.nemeanwines.gr/en