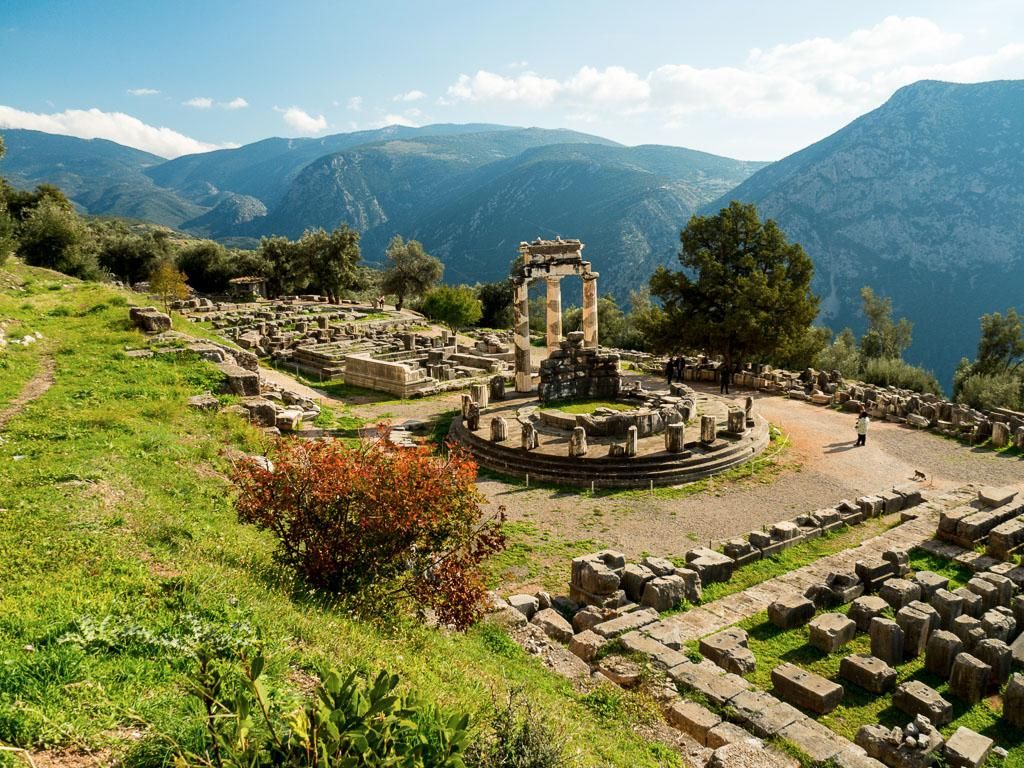 Delphi was regarded the centre of the ancient world and was antiquity’s major religious center under the protection of the God Apollo. The magnitude of Delphi’s oracle, Pythia, influenced some of the major political events of the ancient world, such as the naval battle of Salamis. The legacy of Delphi lasted almost a thousand years but the archaeologists have never ceased unveiling new discoveries of the centre and the religious rituals.

According to mythology, it is here that the two eagles sent out by Zeus from the ends of the universe to find the navel of the world met. The sanctuary of Delphi, set within a spectacular landscape of Mount Parnassus, was for many centuries the cultural and religious centre and symbol of unity for the Hellenic world.

In the beginning the site was sacred to Mother Earth and was guarded by the terrible serpent Python, who was later killed by Apollo. Apollo’s sanctuary was built here by Cretans who arrived at Kirrha, the port of Delphi, accompanied by the god in the form of a dolphin. This myth survived in plays presented during the various Delphic festivals, such as the Septerion, the Delphinia, the Thargelia, the Theophania and, of course. the famous Pythia, which celebrated the death of Python and comprised musical and athletic competitions.

Central to the sanctuary is the Temple of Apollo where the oracle was consulted. Along the way towards the temple, the main road is dominated by small treasury temples offered as a gratitude by various city states. In addition to the Temple and the Treasuries, you can visit the Ancient Theatre, the Stadium and the Sanctuary of Athena Pronaia and the Tholos, probably the world’s most photographed and recognisable temple.

The museum in Delphi, especially for those who love history, can easily be a visit on its own. The museum exhibits one of the most extensive artefact collections of the ancient world, mainly unearthed during the last century of excavations.